“The well paced thriller gets better with each act, leading to a strong, impressively staged climax. Its greatest asset may be Kevin Eslinger’s cinematography, which gives the post-doomsday South a bleak, haunted beauty.” -Steven Hale, The Nashville Scene

“Well made thriller with great creatures, action, and storyline.” –Premiere 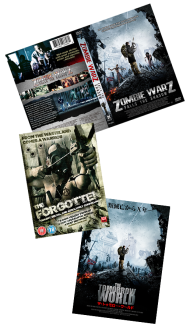 Three years after the War, the United States is destroyed. Civilization has devolved into anarchy and tribalism. A soldier, Michael, finally comes home, only to find his wife murdered and his daughter kidnapped. Accompanied by a disparate group of survivors, he leads the hunt to find his kidnapped daughter and kill the Reverend whose neo-Confederate tribe was responsible. Falls the Shadow is a story of hope, love, and the power of community for good and evil, set in the wasteland remains of the South.